This Promotional Competition (“Competition”) is organized by Coca-Cola Africa (Proprietary) Limited, and its agencies (the “Promoter”).

** Any person who is under the age of 18 (eighteen) years (“a Minor”) must obtain their parent or legal guardian’s express consent, in order to enter and qualify as a participant of the Competition (together referred to as “Participant/s/Entrant/s”). 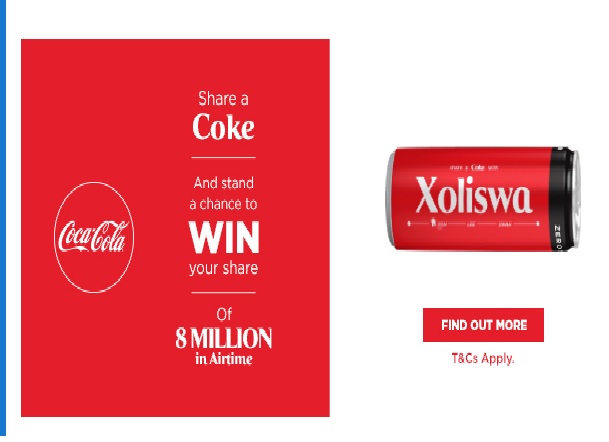 Competition entries are subject to the following conditions :
** All Entries from Disqualified Participants’ cell phone numbers will be rejected;

** All Entries from Minor Participants who have not obtained the express consent from their parent or legal guardian, will be rejected;
** No computer-based entries will be accepted; and

** Entries that are unclear, illegible, are submitted via an incorrect entry mechanism or contain errors or from Disqualified Persons will be declared invalid.

** Participants must look under the yellow can tab or yellow cap liner for their 13 (thirteen) or 14 (fourteen) digit unique code (“Code”);

** Follow the text prompts to complete their entry; (hereinafter referred to as an “Entry/ies”).
** Due to network restrictions, USSD sessions time-out after 120 (one hundred and twenty) seconds (“USSD time-out”).

** If a Participant successfully enters their Code before the USSD time- out, their Entry will be considered valid.
** All Winners of Airtime Voucher Prize/s will be determined by random automatic selection between 1 November 2018 and 31 January 2019.

** Participants stand a chance of winning 1 (one) Airtime Voucher Prize across all Mobile Networks per Entry, as required in rule 9 above.