The Secretariat of the Southern African Development Community (SADC) is pleased to announce the launch of the 2021 SADC Media Awards competition in the four categories namely; Photo, Print, Television and Radio Journalism. 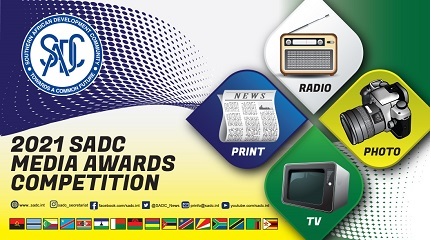 All submissions must be made strictly on the SADC Media Award Entry Form and should contain full contact details of the entrant, including, passport-sized photograph, physical address, telephone and, where applicable, fax number and e-mail address; 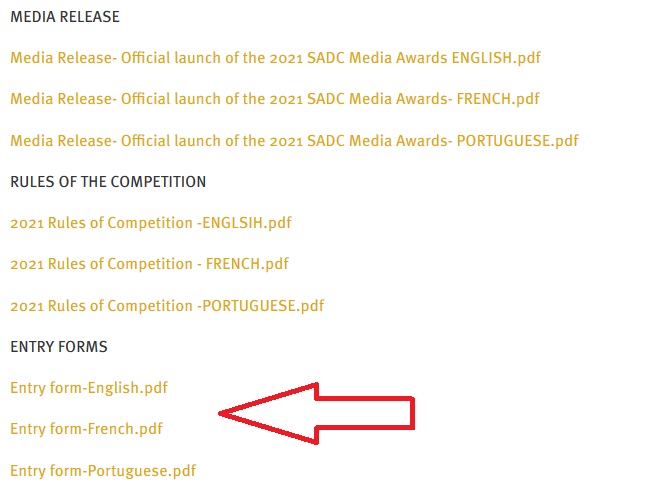 Entries are invited from the following categories:
i) Print Journalism : comprising features/articles published in newspapers, newsletters, websites, magazines;
Print Journalism submissions should have a minimum of 100 (one hundred words and a maximum of 2000 (two thousand) words.

iv) Photojournalism : comprising published pictures with a caption;
Photographic entries should have one (1) photo, or a pictorial spread of not more than twenty (20) photos published in one issue/edition. Each entry must be accompanied by an original newspaper in which photo (s) were published.

b) The themes of the entries to be submitted for the competition must be on issues and activities promoting Regional Integration in the SADC region, i.e. infrastructure, economy, water, culture, sports, agriculture, etc.

c) All media practitioners who are SADC nationals may enter the competition, except those in institutions contracted by SADC and the SADC Secretariat staff;

d) All works entering the competition should be in one of the SADC working languages, i.e. English, Portuguese, French and any national indigenous language of the SADC Region and should be submitted together with the transcript in one of the three SADC working languages, i.e. English, French and Portuguese. These should be published/broadcast (newspaper cutting, websites, magazines, audio CDs, USB and newsletters;

** Selection of the best regional entries will be decided upon by the RAC;
** The decision of the RAC shall be final;

** The first prize winners will be announced and receive their prizes during the 39th SADC Summit of Heads of State and Government;
** The Awards will include Print, Radio, Television and Photo journalism. Each category carries a first prize of US$2,500;

** The runner-ups in each category will receive a second prize of US$1000 and will receive the prize money and certificates in their respective countries through their National Contact Point;

** The monetary prizes will be accompanied by a certificate signed by the SADC Chairperson;

** The prizes will be paid directly to the winner. In the case of a winner being unable to attend the ceremony, SADC will make arrangements to give the prize in his/her home country;

All entries must be submitted to the National Adjudication Committee not later than February 28, 2021